The VigorSwitch P2121 is a high-performance, Managed Gigabit Ethernet switch with PoE+ (Power over Ethernet) on 8 RJ-45 ports. With the increase in PoE powered devices requiring full power, notably wireless access points and IP cameras, the generous 140W power budget is much higher than many other products in its class without fan cooling.

Designed for centralised management, the VigorSwitch P2121 can be provisioned and monitored through both the VigorACS management platform and/or, a DrayTek Vigor router’s Central Switch Management. Easily provision the VLAN configuration through the router and clone switch configurations. Drastically reduce the setup time required for a complex network, with VLANs spanning multiple switches.

The switch can be used simply on a desk, or securely fitted to a wall / shelf, or rack mounted (1u) with the included mounting brackets.

The DrayTek VigorSwitch P2121 has 4 Gigabit SFP module ports which can be used instead of the corresponding RJ-45 ports Nos. 9-12. SFP slots are typically used for fibre transceivers. In comparison to 'copper' (RJ-45) cables, using fibre for connectivity provides longer range and resilience from electrical interference.

The SFP ports provides compatibility with your choice of SFP modules (not included) and therefore the most appropriate medium for your application. If you use the SFP slots, then the corresponding copper port is not active but the others remain available.

The VigorSwitch P2121's Serial (RS232) Console port and SSH server allow for configuration and management of the VigorSwitch through its fully featured command line interface (CLI).

Network Security and Management Features
The VigorSwitch P2121's specification is packed with advanced features to aid reliability and switching performance to your network and is ready for the next generation with both IPv4 and IPv6 support.

The P2121 has 8 standard (RJ45/copper) Gigabit Ethernet Ports, all with PoE+ and four selectable ports (which can be set to either RJ-45 or SFP slots). Features for Quality of Service (QoS), VLANs and network/switch security provide additional flexibility.

Wired 802.1X Authentication
Control access to LAN ports through a RADIUS server, which could be provided by the Vigor 2862 router on site.

Management Authentication via RADIUS, TACACS+ or local accounts
Manage logins to the switch management either with the switch's internal user accounts or through a central RADIUS or TACACS+ server
Voice VLAN & Surveillance (IP Camera) VLAN
Automatically assign VLANs and QoS configuration to devices with matching MAC address OUI (manufacturer identifier i.e. 00-1D-AA-00-11-22 = DrayTek) upon connection to the switch
DHCP Snooping
Limit DHCP server responses to only a specified port to stop unauthorised devices from affecting network connectivity
IP Source Guard
Protects against address spoofing by comparing packets received with either statically configured source IP addresses or addresses learned from DHCP snooping
Access Control List
Similar to a firewall, the ACL can control which packet types (IPv4, IPv6 & MAC) are allowed to pass between ports on the switch
Link Aggregation - Port Trunking
Use two or more 1Gb/s network links to connect the VigorSwitch P2121 and another switch / server. Traffic can be shared between the two ports, effectively doubling the bandwidth of the uplink and providing resilience should one of the links fail.

Power over Ethernet
The VigorSwitch P2121 is a PoE (Power over Ethernet) switch, providing power to any PoE-enabled device, most commonly IP phones, wireless access points or IP cameras over the Ethernet cable.

As well as removing the need for local (at the desk) power supplies, making for tidier installations, PoE ensures power efficiency, providing only the power needed, as well as allowing for time schedules for powering up/down and remote rebooting. Power is provided only when required. PoE also allows for installation of devices where there is no mains power (particularly useful for wireless access points).

Power over Ethernet Management
The VigorSwitch P2121 has a power budget for PoE of up to 140watts spread across RJ-45 ports 1 to 8, which allows for all ports to be used for PoE (dependent on each device's power requirements). For example, if you were using our PoE-powered VigorAP 910C wireless access points, they typically use up to 12 watts, so well within the P2121's budget if you had 8 of them connected.

You can also set time schedules so that PoE devices are turned on/off at certain times of the day, saving power and preventing network access outside of the set operation times.

The Device Check feature can monitor connectivity to a device / remote IP - if it stops responding, for instance an IP camera stops transmitting - the VigorSwitch will automatically power cycle the port it's connected to, allowing it to restart and work normally again.

With smart power management, drawing only as much power as needed together with 802.1az compliance. If a non-PoE device is connected, that port's PoE power is turned off which also avoids any potential damage to non-compliant devices. Ports 9-12 can be used to link to routers / switches and do not provide PoE. 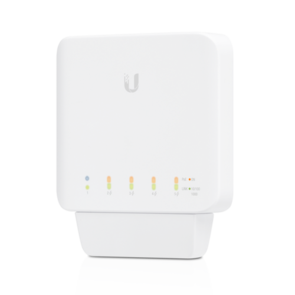